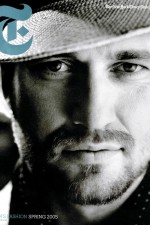 Gerard Butler, known as Gerry (the name that suits him better), was leaning against the wall in the lobby of the Mercer Hotel, thinking of ways to ”energize.” He said he was exhausted, but it didn’t show. Butler is very tall, and his roundish face is animated by bright, expressive blue-green eyes and a great, pronounced nose that perfectly blunts the softness of his features. He was dressed in jeans and a sailorlike black leather peacoat that he recently found in a secondhand store in Iceland, where he’d been filming ”Beowulf & Grendel.” Butler, who is 35, has seesawed between big-budget pictures (he was a co-star of ”Lara Croft Tomb Raider: The Cradle of Life”) and small, independent films like ”Dear Frankie,” a Scottish production that came out last week in which he plays a mysterious man who poses as a child’s long-lost father. ”Lately,” he said in his lilting Scottish burr, ”I have only played characters without monikers. First there’s the Stranger, as I am called in ‘Dear Frankie.’ And then, of course, there’s the Phantom, which is why I’m so tired.” 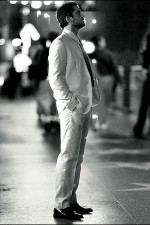 On this surprisingly warm day in early winter, Butler was in New York to promote ”The Phantom of the Opera.” For weeks he had been traversing the globe on behalf of this sumptuous, romantic musical, in which he plays the scarred, sexually compelling Phantom. ”Of course,” Butler said, as he poured a vitamin C powder into a bottle of water, ”if ‘Phantom’ makes me a star, I will still be unknown. ‘The Phantom of the Opera’ is probably the biggest movie I’ve done, and for most of the film, I’m wearing a mask and a cape, and it’s the least recognizable I’ve ever been. When I watch the film, I think, Is that really me? And I like that. Maintaining my anonymity suits me.”

The film’s director, Joel Schumacher, called a few days later from London. ”In Europe, actors don’t expect to be movie stars,” he said. ”Gerry is of that school. They don’t know if they’re ever going to be rich and famous. In America, where everyone believes fame and money are their birthright, actors too often only want to become stars. If that happens, especially if it happens young, it often breeds a kind of infantilism.”

Butler, born in Glasgow, spent his early 20’s studying law. His father had abandoned the family, and acting did not seem like a serious, practical pursuit. ”I was a terrible lawyer,” he confessed, taking a long swig of his vitamin-infused water. ”I hated the law, so I went out at night and drank and partied. A lot.” He laughed. ”I’m very extreme, very Catholic. There’s the good me, and the bad me. And back then, I drank a lot — it was a constant search for the perfect buzz. Sometimes I miss that search. I still cherish those dark moments, but I don’t want to go there again. I stopped drinking for good a few years ago. I had a moment of truth. Well, actually, I had 600 moments of truth. I went back and forth, but I was sick of being sick, and tired of being tired. Now I save my pain and anxiety for work.” 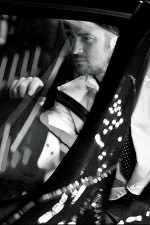 By the mid-90’s, he had been fired by his law firm (which is ”very hard to do”) and had moved to London. ”I gave in to my first desire, which was to act,” he said. Almost instantly, he found work and was often cast as dark, mythic, ominous characters — Attila the Hun in a television miniseries and the original vampire in ”Wes Craven Presents: Dracula 2000.”

Schumacher, known for his casting eye (he launched the career of Colin Farrell), recalled: ”I was in St. Louis, and we’d seen every movie at the multiplex except ‘Dracula 2000.’ I saw the film, and I saw Gerry, and I said, ‘This guy is great.”’

Sensing his career would stall in England, Butler rented an apartment in Los Angeles in 2000. (He has since moved and now has flats in London and New York.) Because of his physical presence, the studios imagined him as an action guy, casting him opposite Angelina Jolie in the ”Tomb Raider” sequel. ”That was the first time I heard that my life was about to change, that I was about to be a star. Of course, it’s hard not to listen, but I don’t really enjoy the frenzy of all that talk. It’s confusing and too exhilarating. Actually, I prefer a bit of pain. I am more comfortable with a kind of sweet melancholy, and that is not the prevailing emotion in Hollywood.”

In fact, Butler identified with the sadness of the Phantom, his isolation and loneliness. ”When I read the script, I kept wiping tears from my neck. But I didn’t know if I could do the singing. I started training even before I had the role. I sang so much during the filming of ‘Dear Frankie,’ my co-stars kept telling me to shut up.”

After passing his audition with the score’s composer, Andrew Lloyd Webber, Butler won the part. This led to talk that he may be cast as James Bond. ”I think they’re also considering Miss Piggy,” he said, about to leave for yet another screening of ”Phantom.” ”When CNN said on the air that there were rumors that I had been cast as Bond, I was back in London. My washing machine was broken, and the central heating wouldn’t turn on, and the house was freezing. There I was, the ‘next big thing’ again, and the contrast seemed greater than usual. On the one hand, I was Bond. On the other, my life was a mess.” As he spoke, his driver appeared with a pretty woman who worked for the limo company. ”Hel-lo,” Butler said, interrupting himself. ”Can I sit next to you on the ride over?” Pleased, she smiled shyly and made a call to her dispatcher. ”I think I’m getting my energy back,” he said, heading toward the back door of the hotel. ”It’s time to take a ride. You never know where you will end up.”

The Phantom Of The Opera Interviewed
Be the first to comment!
Leave a reply »