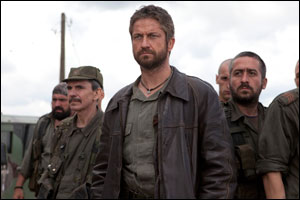 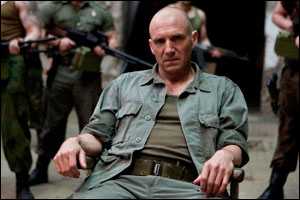 A decade after tackling the character onstage, Ralph Fiennes reprises a juicy Shakespearean role in his bloody, bellicose directorial debut, “Coriolanus,” ambitiously updating the late-career tragedy to “a place calling itself Rome” (actually present-day Belgrade, Serbia) in a move that places this among the Bard’s more macho adaptations. Drastically cutting back Shakespeare’s second-longest play from its original form without sacrificing the flavor of the original language, Fiennes and screenwriter John Logan emerge with a reasonably commercial war movie that is most effective in its least talky stretches, but somewhat difficult to follow in the finer points of its political intrigue.
Gen. Caius Martius, aka “Coriolanus,” is rather unusual among soliloquy-prone protags in that he not only scorns the public but also withholds much of his reasoning, preferring to prove his worth on the battlefield. When he does speak, it is often with the scorching force of a flamethrower. Coriolanus is a dragon among men, scarred of skin, shaved of head and tattooed to boot — the sort of fearsome character that gives Fiennes ample opportunity to bare his teeth and flex his throbbing neck veins.

Unlike Coriolanus, however, Fiennes the director obviously values common folk quite highly, trusting his audience to navigate the dense snarls of Shakespearean verse amid a gnarly thicket of difficult-to-decipher accents. Assisting somewhat are exposition-friendly TV news updates that lay out the key details: Coriolanus has tyrannically suspended civil liberties while Rome is under siege by the Voluscian army, headed by Gerard Butler’s guerrilla-like Aufidius.

Film’s first half is rather challenging to navigate, with vivid military showdowns bringing cinematic excitement to a complex series of political maneuvers that see Coriolanus decorated for his service, elected as consul on the strength of his achievements and ultimately banished from Rome by a pair of conniving officials (James Nesbitt and Paul Jesson) who want the arrogant war hero out of the way. Coriolanus shows little interest in government and even less patience with the ungrateful rabble he fought to liberate, and when it comes time for the talkshow tribunal that will decide his fate, he loses his temper and scorns all those who condemn him.

The plot becomes considerably easier to follow once Coriolanus is cast out of the city, as he humbly allies himself with sworn enemy Aufidius, who finds it easy to forgive now that they are united in their hatred of Rome. Coriolanus’ former countrymen stand no chance in the face of these two fearsome warlords, placing even the general’s old allies in danger. His most loyal supporter and mentor, Senator Menenius (Brian Cox), serves as the voice of reason and rhetoric throughout, but even he is powerless to sway Coriolanus’ bloodlust.

Rome’s only hope, then, is Coriolanus’ mother, Volumnia (Vanessa Redgrave), a curious character who encourages her son’s vanity and barbarism with words that ring of the incestuous. “If my son were my husband,” she advises daughter-in-law Virgilia (Jessica Chastain, elegant but underused as the Helen of Troy-like trophy dividing the men); later, beseeching Coriolanus’ sympathy, she says, “There’s no man in the world more bound to his mother.”

And so it is that “Coriolanus,” which swings between scenes of brutal 21st-century warfare (an early fight between the title character and Aufidius proves especially pulse-quickening) and highest-level political trickery, hinges on a simple tete-a-tete between the utterly ruthless Coriolanus and his iron-willed mother. Redgrave is more than game to step up when the moment calls for it, while Fiennes — who’s been a coiled nerve for most of the film — earns the tragic sympathy his fate requires in his understated reaction to this key confrontation.

As directing debuts go, “Coriolanus” could easily pass for the work of an accomplished master, and though the storytelling lends itself to easy confusion (owing more to the source material than to the execution), the emotional impact reads loud and clear. By choosing such a compelling backdrop as Belgrade for his update and then surrounding himself with experts, Fiennes has made the job easy on himself. Chief among the pros, d.p. Barry Ackroyd (“The Hurt Locker”) brings an intensity to the entire affair, framing everything in visually loaded widescreen, while bombastically inclined composer Ilan Eshkeri keeps the music to an appropriately subdued but nonetheless menacing level.