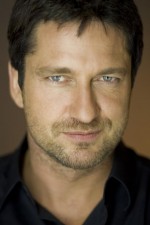 Gerard Butler casually drops this bit of paparazzi bait during a conversation last week, between more mundane talk of his upcoming projects.

He wore a tux, she wore a white gown. “She looked beautiful,” Butler says.

Of course, if one of the country’s most famous and famously single women had really gotten hitched to the emerging A-lister, Butler, 39, would not be sitting alone in the clubby drawing room of The Greenwich Hotel in Tribeca with nary a camera lens in sight.

Indeed, the altar accoutrements were only for a brief moment in The Bounty, the buzzed-about Midnight Run-meets-War of the Roses caper due next summer in which Butler plays a bounty hunter whose next target is his ex-wife, Aniston. (The pair got gussied up to shoot a photograph of their characters’ once-upon-a-time nuptials.)

Still, “it was quite romantic,” Butler says. “We were joking about it: ‘We might as well make this real. Keep everybody happy,’ ” including the entertainment magazines, which have been speculating all summer that there’s more to their relationship than innocent, “we’re-just-totally-good-friends” hand-holding, as Butler characterizes it.

So, three minutes before the shoot, Butler tried to get Aniston’s hairstylist registered on the Internet as an officiant. He slipped a ring on her finger. (“She’s like, ‘Are you kidding me?’ “) And then, as the camera snapped, his cellphone rang. It was his mother.

“I have to call you back. I’m getting married,” Butler deadpanned on speakerphone for all the crew to hear. “She goes, ‘What?’ ” Butler clarified: ” ‘I’m marrying Jennifer Aniston!’ and she’s like: ‘Oh, good. Well, I’m glad you made the right choice.’ “

But Butler, best known for playing the cartoonishly chiseled Spartan King Leonidas in 2007’s 300, returns to action-hero form (literally and otherwise) in Gamer, a sci-fi thriller out Sept. 4 about a not-too-distant dystopic future in which video games are peopled by real, not virtual, humans. And then in October comes Law Abiding Citizen, a dramatic crime thriller co-produced by Butler and co-starring Jamie Foxx, about a man (Butler) who exacts “pure, brutal revenge,” as Butler puts it, after a plea bargain gets his family’s killer off.

From musicals to thrillers

He has done musicals (The Phantom of the Opera) and even children’s fare (Nim’s Island).

“I don’t know if I’m the best actor out there, but I definitely have, how would you say? I have a lot of range,” says the Scot, who can bury the brogue on command and manage a convincing American accent thanks to “easily 1,000” sessions with about 30 dialect coaches.

That variety is key to his industry appeal, Hollywood insiders say. “He’s definitely keeping his foot in the fact that he can be the action guy in some of the choices he’s making, but he’s also incredibly funny, charming and a ladies’ man,” says RocknRolla producer Susan Downey, who’s producing another Ritchie flick, the upcoming Sherlock Holmes starring her husband, Robert Downey Jr.

Butler may be an in-demand actor, but he arrives at The Greenwich Hotel on a sweltering morning not in a town car or even a taxi but via his Cannondale hybrid bike, which he rode from his loft on the edge of the Flatiron district, about two miles north (he also has homes in Los Angeles and London). He greets a reporter with a scruff-framed grin and a slightly sweat-stained charcoal T-shirt. He spends most of the interview sunk into a cushy leather couch, alternately propping up a white-sneakered foot and leaning back with his legs akimbo and his hands clasped behind the head.

For Gamer, Butler has swapped Leonidas’ swords for submachine guns and his Mr. America abs for Popeye-like arms to play Kable, a death-row prisoner who’s competing in the shoot-’em-up game Slayers for a chance at freedom. The man at the joystick controlling him, and his destiny, is a 17-year-old kid.

Butler is a stickler for authenticity. His Ugly Truth co-star, Katherine Heigl, remembers showing up to work on the day they had to shoot the sexy salsa scene. “I was prepared to just wing it and then I found out Gere had been practicing with Cheryl (Burke) from Dancing With the Stars, and I realized I probably should have taken it a little more seriously. But thank God Gere had, since he was the one who had to lead. I could just follow his brilliance and still look good.”

To get Kable-ready, Butler trained five hours a day, Uzi lessons plus two hours in the gym, for about six weeks before shooting started. His forearms in particular were “like, twice this size,” he says, extending his far-from-scrawny flesh-and-blood guns.

Pumping up requires good genes — “I get big quick” — hard work and mechanical intervention. “There’s a device that you hold and it wraps around your arm and you grip it and you go, ‘Grr!’ ” Is the grunting required? “You don’t have to, but I like to,” Butler says, laughing.

Butler swears that in this and in all his manly man roles both historical and fictional (Dracula, Attila and Beowulf crowd his CV), there’s real meat within the beefcake. “Whether people love or loathe those movies, they’d be hard put to deny that there aren’t some strong messages in there and deeper themes. I can’t do it otherwise.”

Gamer, for instance, is “a comment on science, technology, medicine and entertainment. … How far away are we from people actually saying, ‘We can create that. We can create a mini-war every day on our TVs and use people that are useless to us.’ “

The testosterone-fueled set was intense, says Amber Valletta, who plays Kable’s wife, Angie. Still, when Butler’s near, expect a gag or two to be played by — or on — him. On the last day of shooting, a video-playback operator traded places with Kable’s nemesis, played by Terry Crews. A set of elevator doors opened, and as Butler was set to pounce, the crewman leaped out in tighty-whiteys and a bare chest — a flamboyant Spartan — and started dancing for the erstwhile Leonidas. “It was all-around bad,” Valletta recalls. Butler gamely laughed along. He makes everybody else laugh, too, Valletta says.

Butler is “the epitome of a good time,” Heigl says.

Nonetheless, “there’s a lot more to him than people know,” Valletta says. “He’s charming, but there’s a real person there with great qualities and defects like everyone else.”

His guy’s-guy antics, on and off set, help make him accessible to male moviegoers and swoon-worthy to the legions of ladies who love him. By his count, there are 76 sites devoted to him, including GerardButlerGals.com. There are Gerard Butler conventions from Las Vegas to Glasgow, “which is insane,” he says. He has a 10-foot-by-10-foot-by-10-foot storage space in London packed with mail and presents (favorite fan tokens are, curiously enough, religious gifts such as crucifixes and rosaries). He owns enough chopsticks, gifted by Japanese admirers, to build a ship.

But Butler handles the attention with “such grace and such warmth,” Downey says.

“It’s very, very flattering, and I never will look on it too lightly because it’s great to be appreciated,” Butler says. He’s a movie star with Everyman issues — he spent his childhood largely without his father, his twentysomething carousing led him to quit drinking and smoking, the latter with much difficulty — which he says helps make him relatable. “I am very down-to-earth, and I’ve always been very open about my life and my struggles and my pains and my hopes and my fears.”

His M.O. is about “really wanting everyone to feel comfortable around him,” Downey says. And he’s very generous with those around him, whether it’s with a fan who stops him on the street — even though Butler’s on the phone — and gushes that “I went to acting school because of you,” or a journalist whose allotted one-hour interview is well up.

And he playfully addresses the kind of love-life questions most stars would swat down. “I guess I would be doing the same thing” if he were the one digging for dirt. He pretends for a minute he’s the reporter: ” ‘You guys ever held hands? Have you ever looked at her and wanted to kiss her? Were you ever alone? There was nobody else there?’ ‘Yes.’ ‘Ah! That’s it!’ ” It must be lust.

Even though he swears he’s single, he says he has been in relationships. “I’m just very good at keeping them quiet.”

His success, however, is making intimacy trickier.

“I was never one who was great at it in the first place, so I do look to the future with a certain amount of trepidation,” Butler says, laughing. “But it’s just going to take a good woman to come and put me in line, you know? Shake me about and go, ‘Come on!’ you know? To let me breathe but at the same time slap me about a bit” — and to always be ready for the joke.

Find this article at:
http://www.usatoday.com/life/people/2009-08-25-gerard-butler-profile_N.htm

The tormented torso
Be the first to comment!
Leave a reply »