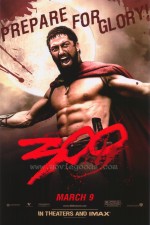 Ahoy, squirts! Quint here with another of my shorty Comic-Con interviews.

This interview is with Gerard Butler, who stars as King Leonidis in Zack Snyder’s adaptation of Frank Miller’s 300, a graphic graphic novel. The footage they showed at Comic-Con (read about it here!!!) was absolutely jaw-dropping. After seeing the 4 or so minutes they brought to the Con, 300 is now one of my most anticipated movies in any stage of development. If you want another shorty 300 interview, you can read my chat with Zack Snyder here, where we talk more about 300 and a little bit about WATCHMEN, his next directorial outing.

QUINT: The reaction to the footage was crazy. I haven’t seen a reaction here at Comic-Con like that since they showed a scene from SPIDER-MAN 2 almost a year early.

GERARD BUTLER: Wow. It felt great to me, but then I’ve never been to Comic-Con before. It’s great to hear you say that because… I don’t know…

QUINT: They don’t do that for everybody.

GERARD BUTLER: I’d never seen it on the big screen, so I was slide over to the side of the stage, sayin’ “Play it again! Play it again!” You know, I could watch it all day!

QUINT: They kind of touched upon it on the panel, but I’m pretty curious… You play such a badass character in 300. Did you pull on any specific characters from film or history for the role?

GERARD BUTLER: I read a couple of really interesting books about going through history… I’m trying to think who it was again… Like, three of the great generals going all the way back from Greek times to the Second World War. Patton was one and Sherman back in the Civil War… and then somebody way back, right around the time of the Spartans… In fact, it was the General who led the surviving slaves to beat the Spartans… And it was all about the ideas that have to be instilled in troops and nations in order to get them to fight as effectively as they can against a superior force.

It was really, really interesting to climb into that, but to be honest I didn’t base it on any one particular guy. I based it on my idea of… I had done these things before, these kinds of characters, and it was how could I make it new and fresh, but still stay faithful to the graphic novel. Because, really, you get so much from that character in the graphic novel, but also give him a bit more life and humanity than he has… and humor. You really get a feeling of this guy’s cockiness and his humor.

QUINT: Did you know of Frank Miller’s book before you did the film?

GERARD BUTLER: I had never read it, but I knew of it. I came across it fresh and I read it at the same as I read the script. I was hooked.

QUINT: What was your first impression when you finished the graphic novel?

GERARD BUTLER: I’ll tell you what my first impression was, actually, when I opened it up… You see these guys marching and then you see the King fight his own captain because he basically beats up one of his own soldiers because he fell on the ground, and then tells the soldier who fell to pick up his captain and carry him. I thought, “S***! Wait a minute! These aren’t the kind of heroes I’m used to.”

That was the first thing that grabbed me, just how tough and brutal and, in some ways, emotionless these guys were. So, therefor, to play with that and push that to the brink, but at the same time allowing them at the end of the day to remain human so that you can at least connect with him, but he had to be so incredibly uncompromising to do what he did, essentially risk his whole nation and culture and lead his men to almost certain death. It takes a certain kind of person to do that.

QUINT: Did they give you anything to assist you with all the greenscreen work you had to do? I know on SIN CITY they had the original comic panels for reference. Did they have something like that?

GERARD BUTLER: You know, often what they would show us would be stills, either from the (set) photographer or from the film itself, with the backgrounds that they intended to put on in very early stages of development. Just to give us an idea of where we were. Also, we could look at computer generated images to kind of show the layout of the place, etc, and where we were geographically. But other than that, a lot had to be left up to your imagination. At times it was easier than you thought, at times it was more difficult.

If it was more difficult and you were confused, then you just made sure that you sat down with the art director or Zack (Snyder) and said, “Okay, where the hell am I? What’s going on? Where am I lookin’? How many are there?” (laughs) You know, to get that idea. Sometimes you could really feel it, but, for instance, to create the idea of being charged upon by an army of a million (people)… I mean, that’s intense. That’s intense. You have to, in some ways, let your imagination fly and then just fly with it, you know? Give it all you got.

QUINT: What’s next for you?

GERARD BUTLER: I’m doing a movie called PRIEST. Andrew Douglas, who directed AMITYVILLE HORROR… Really, really nice guy and I think he’s so talented as well. I’m tryin’ to think of the best way to describe this, but it’s kind of like a Vampire Western… Like MAD MAX meets THE SEARCHERS.

That’s that for Mr. Butler. Can’t wait to see the movie. Hope to get you the rest of those Con interviews… still got 6 to go… as soon as I can. ‘Til then, this is Quint bidding you all a fond farewell and adieu!