P.S. I Love You Q&A with Gerard Butler 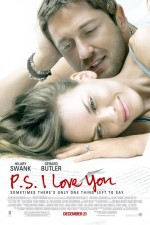 Emmanuel Itier: Is it hard to play a dead guy?

Gerard Butler: No, not really. I don’t think he’s aware of that. I just am who I am. When I was playing the part of him, that is still in memory that it was still history, so I wasn’t playing it any differently. Even the parts that exist in her mind, again, for me it’s as if I’m really there, so I don’t think it made my performance that much more difficult. I’d love to say it did and it was really testing, but no.

EI: You were so sexy and masculine in this role…

GB: Thank you! I had such a connection with Richard [LaGravenese–writer/director] from the second I met him. It was a really great meeting, and he said two minutes into the meeting, “I want you to play this role.” We barely started talking, and by the time I walked out of the meeting, irrespective of the film, I knew I had met a guy I was going to become very good friends with. To date, it was probably the most special experience I had with a director, just in terms of how much I enjoyed it, how closely I worked with him, and how fun and creative it was. And for me, just getting the chance to do some comedy, even though the movie has some heavy sentiments…but for me, there was a lot of lightness to it. I just really connected with Richard. In fact, right now we’re working on two, maybe three projects together. We stayed really good friends. I don’t mean just projects, I mean we’re heavily into these projects. I’ve formed a very strong bond with him, and it’s true–he brings up ideas, thoughts or issues. I am so like him. It is a lot of synchronicity as well. I think, “Richard”–he calls…and vice versa. I feel very close. This role, Gerry, is very much based on Ted Demme, who was his best friend before he died, so I know how special this role was.

EI: Since you are the guy you play–according to Richard [director]–all the jewelry and sentimental jackets, did he take that from you, or did he make that up?

GB: That’s my stuff. I’m not wearing it right now. In fact, I haven’t worn it for a little while. The jewelry I’ve been wearing for years, actually. I wanted to give a little flamboyance to Gerry. He’s a colorful soul. He’s a limo driver in New York, but that’s not really what he was born to be. It was just one of those unfortunate things, I guess, that when you move to another country, you have to take a few steps down in a class or job just to get by. It was to maintain that color he has–the lack of worry and freedom compared to Holly. But no, it was my stuff. The jacket wasn’t mine. We almost used one of my jackets.

EI: Do you have any clothing that’s sentimental?

GB: Well, I have a little leather jacket that I got for about seven dollars in 1986, that I’ve worn so much and even spent my 22nd birthday in jail wearing it, here in LA. I was arrested on my 22nd birthday for drunken and disorderly or something. I was taking a year out here in the States, and the arrest happened, unfortunately, over a weekend, so I ended sitting in a cell. I will never forget being in this tight, tight leather jacket–and this old second-hand, Paul Newman-style jacket–even tighter! And then these eight black guys and one Mexican came in a chain gang–they were already in the proper prison; they were coming to be arraigned from the judge for other offenses. They were all wearing their LA County overalls, and there was me with my ripped 501s and my biker boots and my leather jacket, and I still have that leather jacket.

EI: What kind of drunken behavior landed you in jail?
GB: I ran and tried to jump into a police car, but they had already told me to move on because I was running about and being crazy. Then the next minute, I saw these lights coming towards me. I used to be crazy when I was drunk…and I ran full-speed at the car. It was driving towards me and I was about to jump onto it, and the light started flashing [Laughs] “Oh f*ck!” This was in 1991 or 1992.

EI: Do you still get drunk?

GB: Not for many years.

EI: You are the biggest Scottish actor in the States. How do you feel about that title?

GB: I don’t really think about it. I was thinking more the biggest actor in the world! I’m joking! Why aim small? I hadn’t actually considered it. If you start thinking like that, it’s very limiting. When you’re measuring something…you can’t measure something like that. I feel that I’ve done way better as an actor when I stop thinking about the effects of what I do. I remember way back when I started, I would perhaps consider the superficial effects of success. I’d be: “Oh my God, imagine getting this role!” And I would imagine the whole thing and it would never happen. This is kind of sad, actually. It was when I stopped thinking that way and was more directly linked to the job and how to perform it, and also I expected to be doing that job and to have that confidence and belief without being arrogant. Just thinking “I can do this.” That’s when things really started taking off for me. I try not to dwell on things like I’m the biggest Scottish actor this year, because that’s not healthy.

EI: How do you feel about being the sexiest actor in the world, thanks to your six-pack in 300?

GB: How does it feel? [Laughs]

EI: Yes, and how do you keep sexy?

GB: These are such hard questions to answer because if you even answer that, you’re pretty much assuming your sexiness. It’s like if I was to turn that around and ask the same thing and suddenly you’re faced with answering that question. It’s not easy, so I can say that anything like that, to me, is nice. I’m not going to lie! You would rather have that kind of attention or those comments than not, because that’s sweet. You’d rather have somebody say you were sexy than you weren’t sexy and that you were good looking than you were ugly. But at the same time–I can say this from the heart–I don’t get too caught up in any of that. Again, just like seeing yourself as the most successful actor from any country, I don’t think that’s really healthy. I’ve found in my life that when you start thinking like that, it’s not that it’s just unhealthy, it makes you less happy. You are getting attached to ideas and notions which are not true.

EI: But you do have a sexy tan and you’re wearing a black sexy shirt.

GB: You’re calling it sexy, but to me it’s a black f*ckin’ shirt! By the way, if you ask my manager, we have this argument all the time. Can I just put on a T shirt? “No, you have to look smart! You don’t want people going, “He didn’t give a shit. He didn’t even care.” So I’m here doing a job as well.

EI: Is that why you took off your jewelry?

GB: No, you know what happens? My jewelry was easy to get on, and when you’re filming–like the film I’m doing now–I don’t wear it, so I’m spending more time filming right now–sixteen hours a day. I spend more time with my jewelry off. It’s always in my bag, which weighs a f*ckin’ ton, so I’m not going to bother putting it back on. And then it gets lost. I couldn’t even tell you where my jewelry is right now.

EI: What is your role in your new film, RocknRolla [Guy Ritchie’s new film]?

GB: My character is called One Two. Only Guy Ritchie could make up names like this. It’s all based on various elements of the underworld in London and around property deals. I’m a part of a small-time gang of crooks and we’re all great friends, and not necessarily the best crooks either. It’s back to his days of Snatch and Lock, Stock…, but Guy Ritchie growing up, in a way. It’s brilliant.

GB: It was nice to play somebody with my own name, and especially because this character Gerry is so real and natural, and kind of light and fun, and therefore there is a lot of me in that. There’s a lot of me that lives in that area, so being able to call myself Gerry helped a little bit–not a huge amount, but it definitely helped a little bit with me just being able to relax and be me, and allow the moments and the writing to take over.

EI: What is your plan next?

GB: Different genres, definitely. If you look, I’ve gone from 300 to this, and then there’s the Guy Ritchie film, which is a black comedy. I’ve also just done Nim’s Island, which is a family adventure. I haven’t anything set in stone, but right now I’m doing an action thriller, and the next one will probably be a romantic comedy or a comedy. I want to keep it fresh and keep surprising myself.

EI: What do you do in your spare time?

GB: I don’t have any spare time! [Laughs] These are the only days off from this film I’m doing right now, and it’s been spent doing press.

EI: Do you have any time for women?

GB: Yeah, no time for women.