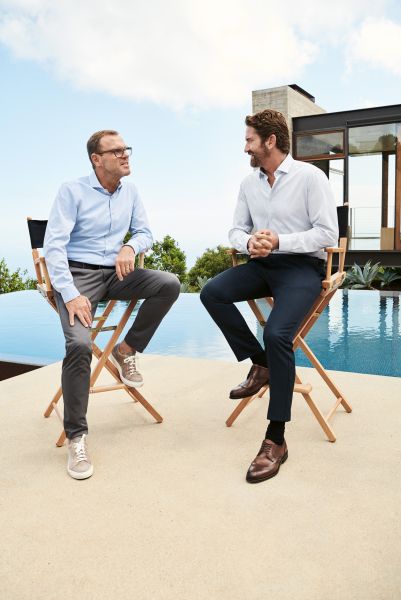 After a joint collaboration within the premium line Signature, the German shirt specialist and the Scottish actor strengthen their cooperation until the year 2022.

Just recently, filming for the spring campaign on California’s West Coast ended, with Butler posing as brand ambassador for the entire Olympus line, this time posing in a casual look rather than a business outfit.

Olymp CEO Mark Bezner wants to make full use of the advertising effect of the Hollywood star after the positive response of the first collaboration now.

A special focus is on the casual segment with an expanded range of casual shirts, pullovers, t-shirts, polo shirts and sweatshirts, as well as the introduction of the Level Five Smart Business line.

“The demands that customers place on brands and products are increasing rapidly, and purchasing decisions are increasingly being influenced by social media, bloggers, influencers or celebrities, and we are meeting this challenge to assert ourselves in the fashion market in the future,” explains Bezner a message.

Gerard Butler, who has gained international fame with films such as “London Has Fallen”, “Gods of Egypt” or “Olympus Has Fallen”, is the first celebrity brand ambassador for the men’s label from Bietigheim-Bissingen in Baden-Württemberg.
By Eva Bolhoefer

Additional information, available by subscription only, at textilwirtschaft.de

Article with Additional Photo: The Fashionisto

#OLYMP SS 2020 Collection featuring Gerry
Be the first to comment!
Leave a reply »