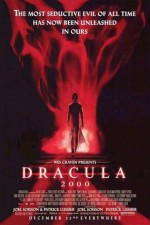 Here’s a hint for all those perfectionist directors who think they can dawdle their way through a movie, Stanley Kubrick-style: If Dimension Films cochief Bob Weinstein tells you that your project is called Dracula 2000, it makes no difference that it’s mid-June 2000 and you still haven’t cast your main man, and so what if it’s early November and you’ve just wrapped — this baby will be in theaters before the year’s over. ”It’s like you’re attached to the front of a rocket, and it’s going,” says hot-seat occupant Patrick Lussier. ”So like it or not, you’re going too.”

Blastoff occurred last November. Wes Craven’s longtime editor Lussier was working on Scream 3 when Weinstein, hearing that Lussier was interested in reinventing the coffin sleeper’s story, got inspired. ”Weinstein had a title idea,” says Craven, the film’s executive producer, ”and when I said, ‘Well, what’s it about?’ he said, ‘I don’t know.”’

Lussier, who had directed the straight-to-video The Prophecy III: The Ascent for the studio, quickly huddled with that film’s writer, Joel Soisson, and came up with a story. On Jan. 13, Soisson handed in his first draft. ”Originally, Dracula was stolen by people and abandoned in a YMCA, floating in a pool with heat lamps over him,” says an amused Craven. ”But Bob says, ‘No! It’s too small! Let’s go to New York! Let’s go to New Orleans!”’ (The story ended up being set in London and New Orleans, although much of Soisson’s plot idea, which involved thieves stealing and accidentally resurrecting the bloodsucker, was retained.)

In June, cast members Christopher Plummer, Jennifer Esposito, Colleen Fitzpatrick (a.k.a. pop star Vitamin C), Star Trek: Voyager‘s Jeri Ryan, Omar Epps, Justine Waddell, and Jonny Lee Miller reported for work on the Dracula 2000 set in Toronto. What they found was a director so prepared that he had already blocked out the first several scenes using assistants as surrogate actors. What the actors didn’t find was the man who would be Count. Though the filmmakers had been watching audition tapes for months, they still hadn’t been able to agree on a leading man. Admits Waddell (Mansfield Park), who plays a toothy vixen, ”It got scarier and scarier and scarier, which I guess was good for my character.”

Finally, only two days before filming commenced, Weinstein signed off on Scottish actor Gerard Butler, who, as it happens, was stuck in Lithuania playing Attila the Hun in a TV miniseries. With a little finagling, Attila the Hun‘s producers, happy that their heretofore unknown star had snagged a lead in a feature, agreed to revamp their schedule to get Butler out early; within a week, the actor was on a plane to Canada. ”Everyone was desperate,” says Butler. ”They were coming out of [the woodwork] saying ‘You’re here!”’ Butler didn’t even have time to absorb the schedule: His first day on the job, he says, ”I looked up at 4 a.m. and said to Patrick, ‘Wow, we’re having a long day here,’ and Patrick said, ‘Um, we’re shooting nights. What did you expect for Dracula?”’

While the actors had slumber time during daylight, Lussier would spend his downtime editing and consulting with the composer and F/X artists — tasks usually delayed until post-production. By the time the cast and crew arrived on location in New Orleans in August, Butler admits, ”we were all pretty psychotic.” It didn’t help that the actors were filming in the middle of buggy swamps so infested with alligators that a memo was distributed instructing them that if approached by one of the beasts, they were to run away in a zigzag pattern. Indeed, on the last day of filming down south, Butler found himself tied to a pole while an alligator lazed 25 feet from him. ”People are feeding the alligator and I’m lying in the water,” he says. ”By then, I’d had quite enough of Louisiana.”

Still, Butler wasn’t out for the Count: Dimension had warned Lussier that he and the cast would have to be called back for additional photography after a rough cut had been assembled. Lussier temporarily released the actors from duty on Sept. 6; he then hopped a plane to L.A. and hit the editing room. Within seven days, he had something to show the studio. ”We didn’t have any special effects [yet], which was hard,” the director says, ”because there were scenes where it would be written across the top of the screen, ‘Really cool things happening here!”’ Weinstein requested some new scenes to, in Butler’s words, ”sex up” and intensify the story line, and on Oct. 23, the actors headed back to Toronto, where Lussier had ordered that the sets be left standing. The additional eight days of filming and postproduction will leave Lussier only one month to complete the F/X shots, which have been farmed out to seven different companies. ”As Patrick says [of Dimension], ‘They don’t pay you for what you do. They pay you for what they do to you,”’ says Craven. In that case, Lussier ought to be making a mint (although Dimension says the film’s budget is less than $37 million). The director will deliver a finished print on Dec. 12, only 10 days before Dracula 2000 is scheduled to open nationwide. ”It shouldn’t be normal, but that’s the way Dimension makes films,” says Craven, who has a directing and producing deal with Dimension and Miramax, and found himself in a similar situation prepping for Scream 2 while still in post-production on Scream. ”What’s the benefit of making movies so fast?” he asks. ”There’s no benefit whatsoever. It’s terribly difficult, and completely unnecessary.”

But for Weinstein, who hopes that counterprogramming Dracula 2000 will bleed bucks from the season’s romantic comedies and dramas, it’s just business as usual. ”We’ve been through this drill so many times,” he says. ”It was exciting at one point, but right now, what’s exciting is to see the final film.” At press time, Lussier was still cutting, and heeding Craven’s advice on how best to deal with the situation: ”Cross your legs and wear a cup.”

The Hulking warrior prince with a heart