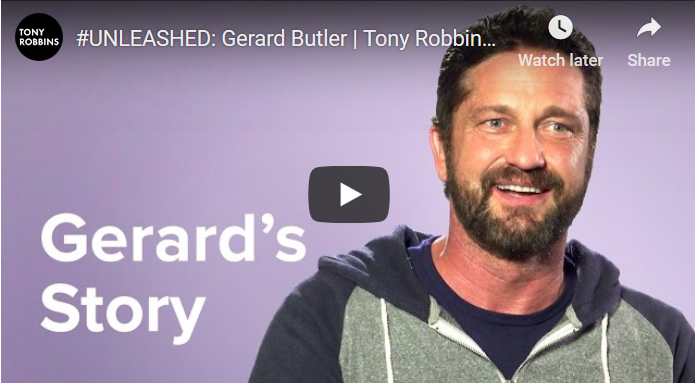 “Fear is a huge issue for me. This technique Tony has is
a really smart way to literally set those fears aside… That to me, is
unleashing the power within.” – Gerard Butler

As a distinguished actor, Gerard Butler spends his life
at the next level. Between his countless roles, Gerard is also a
dedicated philanthropist. Introduced to Tony Robbins through his dad
when he was 17, Gerard had listened to several audio programs before
attending Unleash the Power Within. Despite living life in the public
eye and being one for adventure, Gerard struggled with losing focus and
being consumed by fear. Before attending Unleash the Power Within, he
even found himself nervous about participating with 10,000 other people.
Enraptured by the intense energy of the event, his nerves quickly
disappeared and he found himself finally able to move towards overcoming
his habit of fear.

Gerard’s time at Unleash the Power Within gave him the
fighting spirit to gain the techniques that would help him set his fears
aside for good and get more out of his life. He found a daily way to
rewire his brain and go forward and create his own space. He wants to
continue to focus on gratitude while finding a more direct purpose and
live a life of fulfillment and contribution.

Watch the video below to hear more about Gerard’s story.

Gerry at Tony Robbins 60th Birthday event at Microsoft Center in LA 2/29/20
Be the first to comment!
Leave a reply »