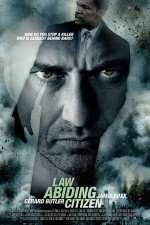 You’ve had a very busy year, haven’t you?

You played a very active role in the making of Law Abiding Citizen. How many hats did you actually wear?

GB : Officially, two, but it felt more like to me, seven. [laughing] But the main roles would be acting, producing and, if you could call it developing a role, I would include that too, because at some points it felt like writing too. I worked very closely with the writers and you could see my ideas throughout the film, and that was definitely one of the most exciting parts of the movie for me — seeing the audience react and get scared and moved and laugh over things you injected into the story.

You did have some memorable lines in the film. Did you help with the dialogue?

GB : Oh, definitely, definitely. Some of it came out just sitting and writing with the writers, and some of it came out of a brilliant rehearsal process that we had with Gary [Gray], our director, and Jamie Foxx. We managed to really get a great couple of weeks just sitting there and seeing what happened. It was great, we said, “OK, we know who we are, we know what is going on.” So with the two of us together, we tried to make those great kind of 12 Angry Men scenes with the tension and suspense, watching these two warriors pitted against each other and bringing up their best game — their minds, their wills, their passions, and their strategies — all within this cage in a prison.

But originally you were going to play the attorney?

So what was it like shifting gears, playing the “bad guy” instead of the hero?

GB : Well, that’s interesting because I didn’t see Clyde necessarily as the bad guy. I definitely felt like he had a lot of heroic qualities. I secretly felt that he was someone the audience would react to strongly, and a lot of it in a good way and then a lot of it in a bad way. That’s why I wanted to take this on because I love to make an audience react like that. And I’ve never taken on a role, a character like this in a movie. To play this person who is full of so many feelings and this, this pain, this horror, this hopelessness, and then this, this cunning, this planning, this fury, this cold calculation, and then this huge enjoyment and charm that he displays as well and also to become this master of disguise — to be able to do all those things and try to pull it off was a big challenge. I actually spent two years as the prosecutor while we were developing it. When we offered it to Jamie, we didn’t know if he was going to say yes to Clyde, but at the time we figured he’d also be interested in the prosecutor so we said, “Do you want to do that? Do you want to play the prosecutor?” And he said, “Yeah.” And I thought, well, this is fun, this will be an interesting story during interviews when this film comes out.

Do you share any of the same frustrations Clyde has with the justice system? I understand you were a trainee civil lawyer in Edinburgh, Scotland.

So do you have any ill feelings toward the American justice system or the European forms of governance?

GB : I think the American justice system has a lot more issues than the European justice system, especially the Scottish justice system. We have a really nice mix of European codified law and the traditional English system of common law, which is what the American system is based on. But I think some parts of the American justice system have gone haywire. Of course, there are a lot of great things that come out of plea bargaining in terms of saving time and resources and not wasting energy with not going forward on certain cases. But, of course, it can be used and abused in a way that often disregards justice, the victims involved, and that’s what we climb into in this film, is to just go into that gray area or that black area. That’s what fascinated me.

But Law Abiding Citizen speaks to greater issues as well?

GB : It doesn’t have to be with the legal system. Definitely a larger issue, something that touches people universally, is to watch someone who is just frustrated with something in life. I think we live in a time in which there is so much going on and we’re all made aware of it because we have access to worldwide information so we can watch the f*ck-ups that each and every one of our own countries makes, but especially America, because it’s stuck in Afghanistan and Iraq and being in the middle of this miserable economy. That’s something that none of us has personal control over. We’re just sitting here and we’re screwed, and we have no access to any justice or recourse. You just have to sit and watch and you want to strike out and you want to stand up and you want to make the people responsible for this and see what they’ve done and you want them to make them suffer. Or that could be in a personal way as well, with your family and work, or with a situation perhaps similar to this, in which someone could be abused physically or emotionally by others that are either close to them or are strangers.

Your character went from happy family man to powerless victim to become someone filled with so much rage. What was it like each day on the set taking on all of these different emotions?

GB : It probably at times made me a pain in the ass on set. [laughing] People didn’t really know what to expect — and neither did I — although I also tried to keep a pleasant demeanor. If I know I’m in a bad space I try to stay away from everybody, and I think that people get that, but that’s why I wanted to take on this role. There are so many facets and emotions and complexities to this character and I feel that I have a lot of that going on, not to take that away from anyone else. I think we all have that going on, which is why we can identify with this guy because we have a huge amount of these feelings, and this character gets to display them just because of who he is and also because it’s a story that brings them up. So it just felt like climbing into my own space and my own memories and my own history. And then a lot of it, sometimes you just have to leave that alone because the story is so powerful and so pure and so clear that just by being there these things will just happen to you.

You retained an acting coach for this role. After doing so many films, why now?

GB : There was a lot of work in this movie to do it just right. And either we could make a nice movie or we could make a brilliant, memorable movie and I couldn’t stop until I felt we were there. I’m very compulsive and obsessive — especially obsessive — therefore, it was getting hard for me to sort of detach myself from the developing and the writing part. The acting coach was as much someone to come in and say, “Now let’s just talk about the character and leave the producing part. I’m here to just sit with you and talk about acting and this role and developing this character.” It was a great idea because it really helped me focus. I worked with a brilliant coach who a lot of times helped me see things in a different way and to deepen and enrich my character and make him more exciting and interesting.
Thank you to Johnny from Ask Men for the links!

NAYA: Legend of the Golden Dolphin (2015)
Be the first to comment!
Leave a reply »