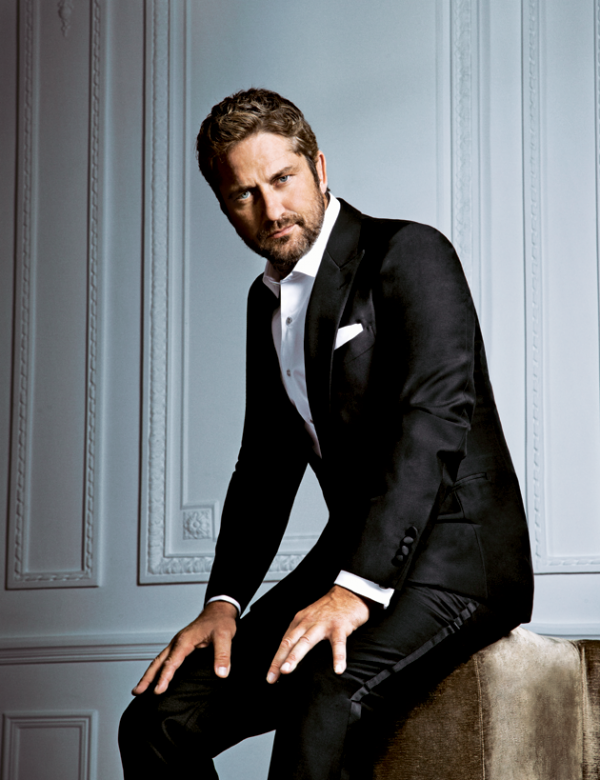 He is joking, hearty and very attractive. He hung up the mantle of attorney to be an actor. They go hero roles … and likes. At Christmas meets in Scotland with yours, but before he came to Spain as ambassador of the perfume Boss Bottled

Win big natural, with a husky, strong, very seductive voice and an overwhelming sympathy. It is not as strong as in 300 film in which he played a Apollonian Leonidas, but still a Scottish tiarrón. Gerard dances during photo shoots, he laughs, he takes pictures with everyone and look into the eyes of their partners. It is a spontaneous braveheart returning girls crazy.

XLSemanal. It is the image of Hugo Boss fragrance whose slogan is “Today’s man.” Do you feel it? Are you a man today?

Gerard Butler. I hope so. For me it is someone passionate, intense, strong but also sensitive and emotions. And authentic. So I changed course in the middle of my life I was a lawyer and became an actor. I followed my heart. Part of that definition of man today is to feel the freedom to do what you really want to do.

XL. How did this change of life actor lawyer?

U.K. My life changed completely. I still sometimes dream I’m back in the office as a lawyer, and I feel relieved to wake up because I did not like that. When I put on my suit and tie and went into the office the first day, I felt out of place. I remember very well the first six months worked on tax issues.

U.K. Exactly, that’s the thing. But I’ve learned a lot about being an actor in my two years as a lawyer because to be somebody quite smarter and more interesting than I was. I did not like what he did.

XL. How do you end this?
U.K. I got fired. So I wonder where to go and decided to follow my dream. So the morning after my dismissal, that morning, I packed my bags and moved to London.
XL. Attila, Leonidas, Mike Banning … Do you get papers hero because he saved a child from drowning in the River Tay?
U.K. [Series]. It is true that I have been in crazy situations up trucks on fire and things like that, maybe it’s a matter of my Scottish blood. The Scots are very warriors. I’ve always been like that.
XL. Would you go these papers?
U.K. I’ve always known how you feel that integrity, that nobility, courage, courage meaning a classical way, traditional. I understand and enjoy playing.
XL. The ghost of the opera or 300? What movie has been more decisive in your career?
U.K. 300, because it was a huge success and changed my career. But the ghost … was a very important experience in my life so I dove in that role … I felt his pain, his loneliness, so very much that the character never left me. And it was a very difficult role, came home after midnight and I had to get up at half past three in the morning to return. No time at all: six hours spent in makeup. Towards the end of the shoot I worked nine consecutive days sleeping three hours a day, I was losing my mind. I ended up exhausted.
XL. Also hard was it 300?
U.K. I trained for eight months, the last four before we started filming trained six hours a day. I trained much because he thought: “They fought to the death, how can I do something equivalent in the film?”.
XL. The transformation was amazing.
U.K. He had to. There were the best specialists in film dubbing, extraordinary people who normally think that the actors are not the strongest. I wanted them to see me so hard I thought, “This guy I respect, I would.”

XL. Still you are watching the muscles?

U.K. I still like to train. But this style of training is over for me. 300 I destroyed. It was too much. Also, when you get to that end to sculpt the figure, it is a matter of vanity. If it is not because the role requires, I find no reason to do so.

XL. Are the perks of being a star.

U.K. If a star I try to focus only on the positive.

XL. What is it negative?

U.K. When you become famous, you have your conflicts and your lows: you must get used to being judged constantly and you wrong, and you have to be careful. But there comes a time when you take the precautions you should take. I prefer to concentrate on the benefits that gives you fame.

U.K. You mean something in the lives of others, you can make them laugh or make them think about things that inspire them. I am fulfilling a dream and it’s a great life.

XL. How do you celebrate Christmas? Are dresses especially for dinner?

U.K. We meet in Scotland in the Highlands, the whole family: my mother, my stepfather, my brothers and sisters, all my nephews … We cooked a big dinner and then we went for a walk in the countryside. No matter what the weather is: we live in a beautiful place and we walk. Oh, and at dinner I have no choice but to get any of the sweaters that my family always gives me at Christmas: are convinced that I like. So I sweat without stopping because the heat is high and sweaters are very fat; I also tend to give away shoes, I must have a hundred pairs.

XL. Would you touch the dishes?

U.K. Sneak attempt, but not wash. My mother does not allow it, forcing me.

XL. His mother helps him fame not let it go to your head.

U.K. Malibu live in a huge castle … Just kidding. I live as normal as always. The only thing that has changed is that when I go to a mall and is busy, try to do my errands faster, but I usually walk or bike, like everyone else. It must be so: if not, I would not.

XL. In Spain it has been several times.

U.K. Yes, a lot, for business and leisure travelers. When I was little, I had a great time in Mojacar and that was impressive, more than 40 degrees heat, but then I got on very well, something rare in a Scottish. Now would not hold much heat.

Passionate and authentic. Defines the current Boss Parfums men and they collect their fragrance Boss Bottled, elegant and spicy chords and a bottle of timeless design. Price: € 63 (50 ml).

Social Media roundup for May 2019