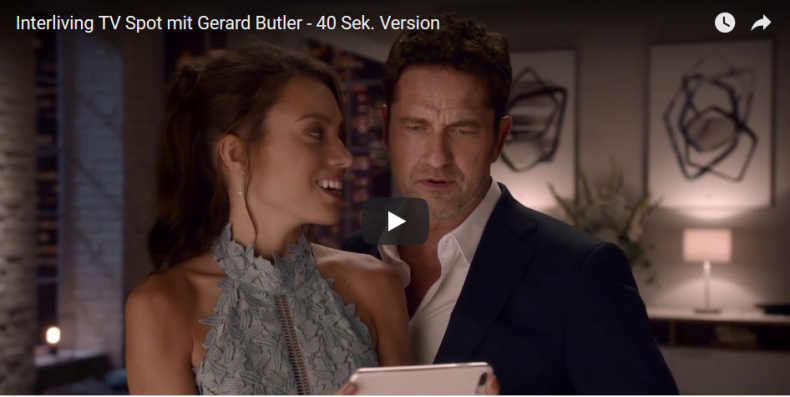 The new TV Spot for the new Interliving campaign with Gerard Butler is here! The campaign focuses on the individual and functional furniture of Interliving. In the TV commercial, for example, the Sofa Series 4050 is seen alongside Gerard Butler as “the essentials.” The spot is available in various lengths – this is the 40-second version.

More about the campaign: https://www.moebelkultur.de/news/neue-interliving-kampagne-startet/

The essentials are of course the furniture! Also in the new “Interliving” campaign they play the main role again. Today, the interior partner partner VME presented its shareholders and the press the new TV commercial for this year’s advertising campaign for its own brand. In the 40-second, Hollywood actor Gerard Butler performs – next to the 4050 series “Interliving” sofa.

Because of the great success of the first campaign, the association has chosen to keep its slogan “The essentials to see”. Although Butler has been hired by an international star, it will literally be on the sidelines. Instead of the well-known advertising face, the furnishing partner ring VME confidently puts the furniture in the limelight. The message to be conveyed is: “Interliving” furniture can be customized for every need and taste thanks to a huge variety of types. As in the past year, the TV spot will again be flanked by numerous other measures – from advertising material for the connecting houses via print ads to contributions on various social media channels. The 360-degree campaign is designed to ensure that customers no longer miss the mark.

Latest work with the one and only @gerardbutler, it was a pleasure to work with him 😍 #jobliebe #hottie🔥 #gerardbutler #makeupartist #hairstylist

“The essentials are to be seen “- the furniture brand Interliving confidently appears in its current commercial on 25 September, the new campaign starts – and in the TV spot, on billboards and online is next to the high-quality sofas, box spring beds, bedroom and living room furniture none other than Hollywood star Gerard Butler, unlike other brands, where the focus is not on the actor, but on the interliving furniture itself.

“Last year, we received the German Brand Award in the Special Mention category with our first Interliving TV commercial, and this year we are delighted that we were able to win over such a renowned actor as Gerard Butler for a collaboration in the next step – However, we are once again focusing on the charm of our high-quality furniture, and they are the center of attention with all their advantages, “says Frank Stratmann, Managing Director of the furnishing partner ring VME, which as an association has developed the Interliving brand together with its medium-sized furniture retailers. The range is impressive: Interliving furniture combines timeless design with intelligent, sophisticated functions – the furniture retailers involved have put all their expertise into development.

This is also clear in the current Interliving TV ad: There Hollywood star Gerard Butler is absolutely thrilled with Interliving and the countless possibilities that the furniture offers. So he can suddenly, as if by magic, easily configure the Interliving Sofa by snapping his finger. The message of the spotlight is clear: Interliving furniture can be individualized for every home with its large variety of types – it is available in numerous designs, fabrics and leathers, sizes, seat heights and much more.

There are already more than 200 medium-sized furniture retailers in the Federal Republic of Germany alone, which lead Interliving in its product range – more than 30 of them have even been acquired as Interliving partner houses. They have renamed themselves and now carry the word “Interliving” in the company name. Further pictures, an overview of all participating dealers and the current TV commercial can be viewed at www.interliving.de.

Gerry filming Festina Watch commercial in Barcelona, Spain
Be the first to comment!
Leave a reply »